Press Any Key to Continue

One of my favourite games of 2015 has been DONTNOD’s Life is Strange. It’s a brilliant indie-film-coming-of-age-time-travel-story about a girl who’s recently returned to her home town and struggling to repair past friendships. Oh, and try to prevent the town from being destroyed by a crazy magical tornado, a disaster she might be able to avert by manipulating time.

No one would be able to claim that it’s a flawless game, but it does so much stunningly right that it’s going to be on my mind for a long time. At some point, I might need to write about how the gameplay works to mirror the emotions of the main character–Max–with the emotions of the player. That’s some fantastic stuff. But right now, there’s one thing that I was to focus on: pacing.

Pacing is a tricky thing to get right. It’s hard enough when you’re telling a linear, temporal story, where you have a good amount of control over how things unravel. With interactive or non-linear stories, though, you run into a lot of trouble. When you don’t know what the player might do–what order they’ll encounter events, how long they’ll spend on different actions, what details they may or may not have discovered–pacing can quickly go out the window. You can either embrace that, and design in such a way that pace is somewhat mitigated by gameplay (Halo works on a notorious thirty-second cycle, where every thirty seconds the player is forced to pause and reevaluate their approach, with a major shift in the action occurring roughly every three minutes), or you can fight it, and do everything you can to keep things locked to a tight, controllable (or at least predictable) script (which is both the best and worst quality of Telltale games like The Walking Dead and The Wolf Among Us).

Life is Strange walks a funny line between the two. On one hand, it’s a very linear game, and many of its sequences are played out with an acute sense of time–this is a game about time travel, after all.

But it also does something that’s rare for games. To have things play out at a certain pace, games can urge you to speed up or force you to slow down (seriously, though, enough with the goddamn walking-with-a-hand-to-the-radio-in-your-ear sequences). Life is Strange, however, occasionally asks you to stop. Completely.

Case in point: if you go to Max’s dorm room, she has a guitar. You can pick it up and play it, and you’ll continue to play it until you hit a key to put it back down. It seems like a small thing, but these are some of the most oddly powerful moments of the game. They’re restful, and they’re important to the character. It’s an intimate moment, and you don’t really want to interrupt her. It isn’t just a throw-away scene, either. The camera pans and cuts, framing her with the things she finds most important in life.

There are moments like this in every episode, but there’s a specific scene in episode three which has probably been my favourite sequence in the game so far.

After a string of very intense (and fast-paced) scenes, the game’s started slowing down again. Returning late at night, Max crashes at her best friend’s house. In the morning, you both wake up, and after a brief conversation you both…do nothing. You lie there, listening to music with your best friend. Sun is streaming in the window, everything is quiet and calm. And you know, deep down, that this moment isn’t going to last.

At any point, you can chose to get up and continue on your way, to get the story rolling again. But you don’t want to. You want to hang on to this moment, to stay just a little bit longer, in that eternal-summer kind of way. As soon as you get up and face the world, things are going to become complicated again.

When I played this sequence, I had Max lay in bed and listen to the entire song. Three whole minutes of doing absolutely nothing, and yet it was engaging as any other game I’ve played this year. It’s how I played it, because I feel it’s what Max would have done.

Life is Strange isn’t the first game to do something like this. There’s a sequence in The Darkness where you’re sitting with your girlfriend, watching To Kill a Mockingbird on the TV in your apartment. At any point, you can get up–but again, you don’t want to. You want to sit and watch a movie with your girlfriend, to enjoy this moment of peace. You can actually watch the entire movie with her, if you want. There’s an achievement for it.

Pauses in non-linear games are more subtle. In the STALKER games, it’s extremely dangerous to travel at night. But instead of ramping up the action alongside the danger, it uses this time to force you to slow to a stand-still. Safe and secure inside a camp, you’ll find a quiet nightlife taking place, with fellow stalkers sitting around campfires, trading stories. Maybe one of them will break out a guitar. It’s hard not to stop and enjoy the music and conversation, if just for a moment. 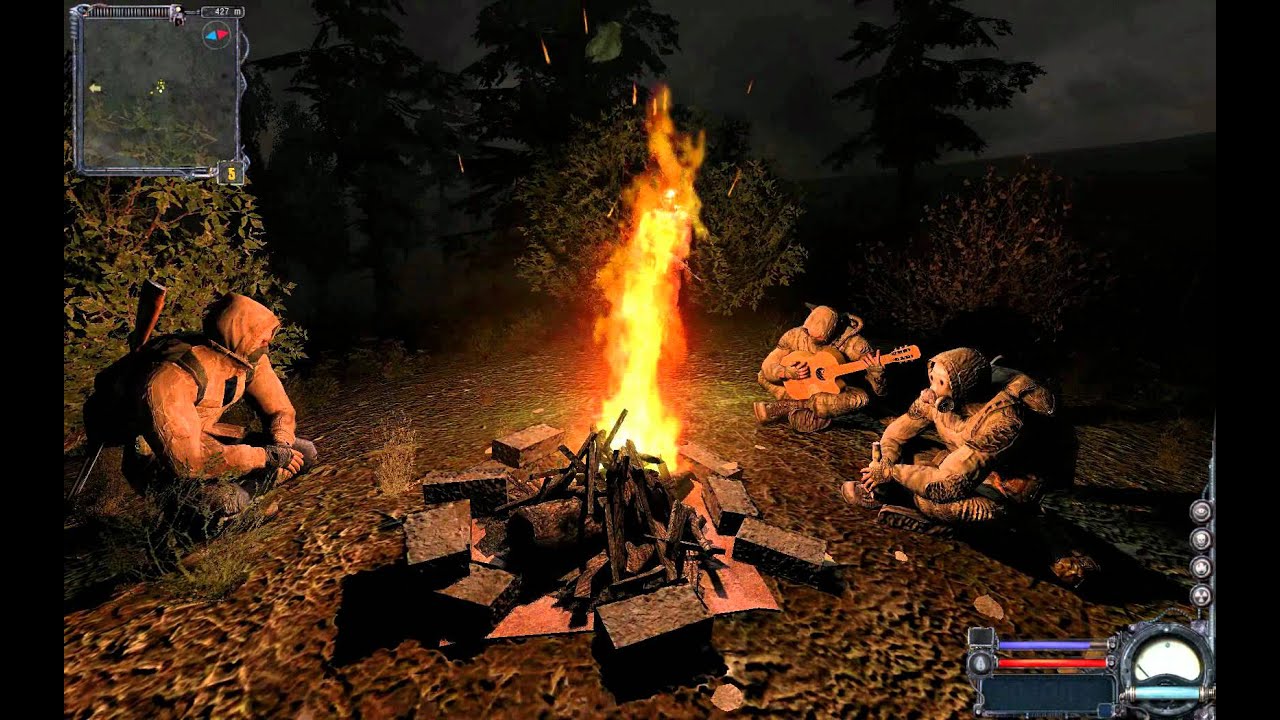 I think these moments are what initially attracted me to The Long Dark, too. They’re peppered throughout. You’ll find yourself in a scenario where the weather turns against you, and you find yourself with no option but to wait out the storm in a cave or ruined structure. It’s a chance to sit calmly by a fire as you watch a blizzard rage outside, and it’s your best chance of survival. They’re introspective moments, and–for me–the game at its most immersive.

I love silence. Maybe I’m skewed because I’m such a raging introvert, but a good pause is something I find really captivating. I want to lose myself in a moment, and DONTNOD deserves a lot of credit for how effectively they’ve crafted them.

(Unnecessary disclaimer: I work on The Long Dark, and I worked on DONTNOD’s previous game, Remember Me. I’ve had absolutely nothing to do with Life is Strange.)

One thought on “Press Any Key to Continue”